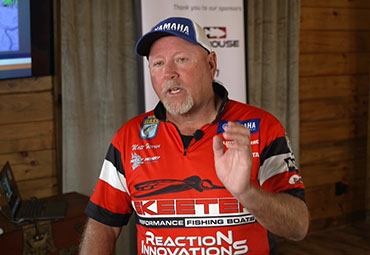 Matt Herrens first childhood bass came on a straight-tailed 6-inch plastic worm while walking the bank. His career and his gear have come a long way since then, but hes never forgotten about the old faithful worm. Hes particularly fond of it in the summer, when heavily-pressured fish move offshore. They can still be caught, he proclaimed, and noted that todays advanced gear  fluorocarbon, braid, graphite rods and tungsten weights  make the process much more effective and enjoyable.

Theres just something about fishing a big 10-inch worm in the summertime that I absolutely love, he continued. Part of that is its versatility  its effective in rock, wood and grass. You can drag it, swim it or hop it. Its a stupid simple bait that attracts very, very big fish.

Ninety percent of the time hes historically used a Texas rig, varying 1/8- to 3/4-ounce sinkers in order to adjust fall rates. In recent years, though, the Neko rig and the dropshot have redefined the game. The former, he explained, is as good in 25 feet of water as it is in 5 feet. Hell put it on a spinning rod with 12-pound fluorocarbon, insert a 3/32- or 1/8-ounce weight, and its off to the races.

Patience is key in worm fishing, but for those who struggle with that, a heavy standup head, football head or shaky-head allows anglers to fish quickly but also keep a lure in the strike zone for an adequate amount of time.

Herren likes to rotate through the various techniques both to keep the bass fired up and to get that initial strike. I equate worm fishing to spinnerbait fishing, he said, meaning that sometimes a particular combination of components add up to the right vibration pattern.

He nevertheless keeps his color choices simple: The big thing I key on in the summertime is reds, he said. That usually means plum or redbug. Two other staples that enter the rotation are green pumpkin and some form of black. Morning dawn is also a popular and frequent choice, especially in straight-tailed worms.

On hydroelectric impoundments, generation schedules can be critical, and serious anglers should be on their best areas when water is flowing, but Herren added that offshore fish can still be triggered even when theres little or no movement. There are feeding windows all day long. The bass may move up, feed, and then disappear for a while. Anglers should continue to check their best spots and areas throughout the day.

He also encourages anglers not to forget about the Carolina rig. We used to call it the chicken rig  when you was chicken you was going to get your teeth kicked in if you didnt throw it. He recalls David Fritts in his heyday winning hundreds of thousands of dollars by Carolina-rigging a Zoom French Fry. Now most bass have seen them, but its still a premier way to cover water and figure out the composition of the bottom, along with transition areas.

If you want to learn some of the veteran Alabama pros additional tips for summertime worm fishing, including the settings he utilizes on his Humminbird 360 to maximize efficiency, check out his full video, available only by subscribing to The Bass University TV.

Where are the fishing biting? Check out this weekend's Big Bend … – Tallahassee Democrat

7 Steps On How To Roll A Kayak