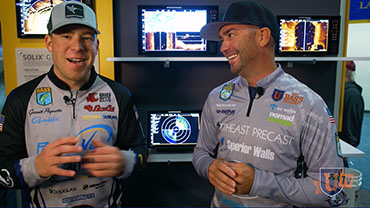 Modern marine electronics offer an array of color options that were unfathomable to those of us who used the black and white flagship models of prior generations. Nevertheless, all of that choice makes it tough to figure out whether youre seeing the best possible picture, so anglers default to single solutions. Thats a mistake, said Michigan pro Garrett Paquette.

Its something that a lot of guys overlook in my opinion, he said. A lot of guys go out there with factory settings and fish  which are great  but if you want to take your game to the next level, you want to see more detail, you want to understand what your graph is showing you, you can play with those color palettes and you can truly maximize your units.

A lot of what is best comes down to personal preference. We all have different eyes and different sunglasses. What works best in sunny conditions may not work as well when its cloudy. Even the angle of your graph can have an impact. Nevertheless, the following is Paquettes thought process.

Starting with side-imaging, in low-light conditions hell start with darker colors, which he feels show the greatest level of detail. As the day goes on, they become less practical to use, so hell go to a brighter color like amber. The units frequency settings also make a difference. Hell run his Humminbirds on Mega as much as I can, but in shallow water with a soft bottom hell often switch to 455 to pick out things that Mega cant find. Theres an in-between setting of 800, but he rarely uses it. If I can use Mega, thats what Im going with.

Contrast also matters. When he finds an object he wants to investigate, hell stop the screen and bump the contrast up and down until he finds what he wants.

Even with similar types of cover, he may use different colors. With hydrilla, for example, he prefers soft palettes like blues and browns. Milfoil, which is softer, demands something brighter.

On down-imaging, he doesnt need the Mega frequency. I like the 455, he said, explaining that while its not as crisp as Mega, it shows more of the bottom. He keeps his color palettes simple, preferring anything that provides a lot of separation, because hes more worried about whats in the water column than the bottom.

He also recommends that anglers adjust their chart speed to account for their idling speed when using both SI and DI.

For his 360 settings, he likes brighter palettes including yellowish-red and reddish-orange  something he wont have to adjust much as the day goes on.

The speed of your 360 sweep is also critical, and again a matter of personal preference. The slower the sweep, the better the pictures going to be, every single time, he explained. However, if you go too slow, you may miss things.

If you want to get more insight into how Paquette adjusts and utilizes his Humminbirds advanced capabilities, check out his full video, with fellow pro Greg DiPalma serving as the interviewer, available only by subscribing to The Bass University TV.

Checking Your Boat for AIS